The group exhibition at acb Gallery, featuring several new artists, endeavours to summarise recent trends in painting. Over the past few years, the youngest generation of painters have brought new interpretations of figurality into the global spotlight, with figurative painting positions becoming a novelty of elemental power in contemporary art.

Today’s figurative painting is no longer necessarily linked to the technologically conscious photorealist tendency that had a dominant voice in post-millennial painting in Hungary. The new figurality no longer seeks to analyse our visual culture, imbued as it is with digital images, from a distance. Instead it immerses itself, often instinctively, in the system of signs and symbols that the youngest generations have acquired as their mother tongue over the past decades, thereby creating a kind of private mythological language.

It comes as no surprise that the artists now emerging on the scene instinctively seek to redefine the figure, which always comes to represent a story or narrative on the canvas. As, in our day and age, a personal tone, storytelling, and an ego- and brand-centred approach have become the most effective means of communication, it is no coincidence that the figure – the hybrid human image – of our time, has, in some manner, also returned to the epicentre of painting. And this return is a particularly intensifying impulse after the tendencies of conceptual and new abstract art to explicitly seek depersonalisation.

Perhaps never before has a generation approached figurality more freely and boldly, without inhibition or fear. What is more, the closer we look at the dynamics of micro-trends in painting, the more exciting the picture that emerges, for the concept of figurality has never been more eclectic than it is today. While there has been precedent for a similar interplay between figurality and gesture in the music-inspired painting of the 1980s, the figurality of our time is even more of a hybrid: it simultaneously incorporates the instinctive approach of gesture painting, the excessive referentiality of pop culture, and the attraction and repulsion inherent in the lessons learned from abstract art. As another important element of this complex constellation, artists, in the name of figurativity, are mostly concerned with creating their own signature painting style. In this way, figurality primarily becomes a means, rather than an end.

The playfully figurative paintings of Mátyás Erményi (1992) are concerned with the individual reinterpretation of Eastern European object culture and visuality. His paintings show fragments of our living past from a child’s perspective, without seeking to evoke feelings of nostalgia. The artist's sometimes drawing-like compositions, incorporated into systems of lines, often draw on the world of comic books and cartoons. At the same time, the personified figures on Erményi's canvases embody the strangely ambivalent feelings of kindness and fear, cuteness and melancholy, which still count as the foundation stones of our collective socialisation.

Remediation is one of the key concepts of the art of László von Dohnányi (1990), a graduate of the Royal College of Arts in London. This young German painter's latest works are inspired by the digital aesthetics of 3D modelling; they are characterised by computer-generated CGI images, as well as prickly, ultra-sharp, angular forms. Von Dohnányi, however, as a kind of retrograde remediation, turns digital images back into paintings, thereby indicating that oil on canvas as a medium remains one of the apex predators of our time, as it is capable of integrating new emblematic forms of representation. This is the way Von Dohnányi's complex and convoluted figurative painting reflects on the hypermediated digital culture of our time, and thus on the most elemental questions of our experience and interpretation of reality.

Barnabás Lakatos Gelléri (1997) succeeded in developing the sensuous – simultaneously symbolist and expressive – figurality that is now regarded as his trademark before he graduated from Eszter Radák's painting class at the Hungarian University of Fine Arts. Although Lakatos Gelléri defines himself as an artist, who mixes 90s kids aesthetics with post-internet painting, his paintings also operate with a characteristically timeless set of symbols. The vibrant and extraordinarily colourful compositions of the artist’s most recent cycle are populated by personified animals known from fairy tales, animated films, myths and the Bible, entangled in the jungle-like flora of the paintings. Barnabás Lakatos Gelléri's figures are ancient, universal symbols deeply embedded in our culture, which, in addition to a kind of private-mythological reading, can also be considered through the lens of several other interpretative frameworks. What is more, the young artist employs increasingly radical, free and relaxed techniques of gestural painting for shaping figures in his latest canvases, which feature the fragments of the most-well known Hungarian myth, the tale of the Miraculous Deer, who led, the nomadic brothers to the West.

Fruzsina Kiss (1998) studies at the Weissensse Kunsthochschule in Berlin. Her large-scale canvases nevertheless attest to an unusually mature methodology of gesture painting. Kiss’s visual world is often grounded in calligraphy; her handwritten notes play an important role in many of her works. In her paintings, Kiss combines the liberating effect of automatic writing with the visual logic of gesture painting based on complementary colours. Patterns that tend toward the abstract form additional layers, interrupted by spatially extensive signs and symbols. While, similarly to her peers, Kiss’s art draws heavily on contemporary fashion and music, her main inspiration lies in her own instinctive painterly logic, which has the capacity to seamlessly fuse several of these painterly layers.

Anne Neukamp (1976), who has been teaching at the University of Dresden since 2020, is the most senior artist of this exhibition. Neukamp’s paintings, which build on enigmatic symbols, have received considerable international attention in recent years, in parallel with the rise of figurative painting. Neukamp makes the motifs of her moderately coloured paintings overly large or overly abstract, while also playing on the mechanical forms and technologies of visual representation. Her figurativity is certainly unique in that it invites pictorial contemplation, offering no solutions or definitions, but prompting instinctive associations instead. 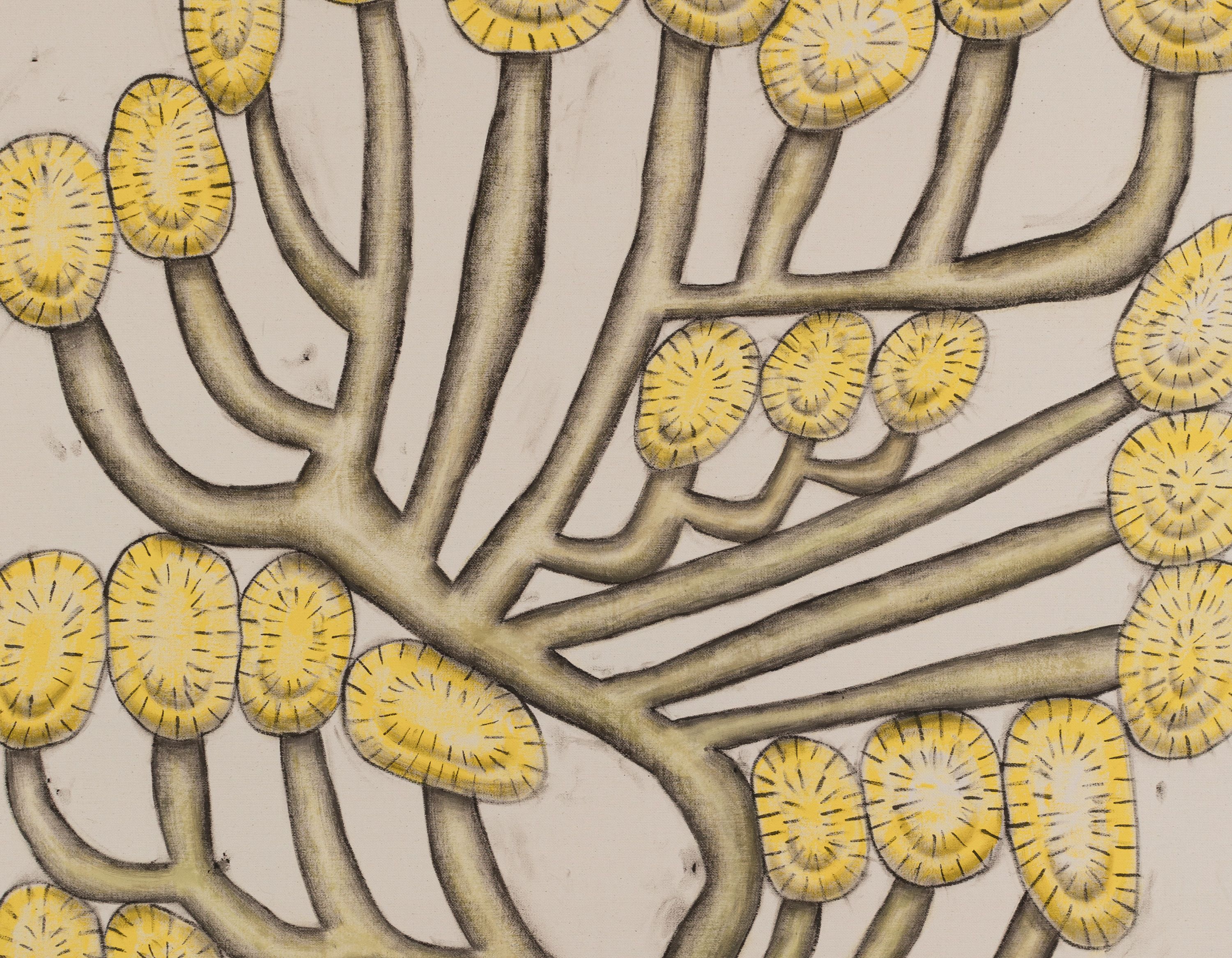