acb Gallery presents the third solo exhibition of Ferenc Ficzek (1947-1987). Ficzek’s short career of only two decades is characterised by exceptionally focused visual research and an experimental approach independent of medium. Ficzek’s art matured under the tutelage of Ferenc Lantos and in the course of his activity as founding member of the avant-garde artist collective Pécs Workshop, established in 1968, which has recently become ever so widely known owing to several local and international exhibitions and publications. His core propositions revolved around representation: he explored the formative power of representation and human perception, sometimes in a more analytical, even scientifically methodical manner, sometimes mixed with humour, using free and inventive solutions. The subject of his works can be a human figure illuminated from an extraordinary angle or a stool as well as the illumination that scans and delineates the object or the plasticity that results from the interplay of light and shadow phenomena. Photography, graphics, painting and even the moving image, which Ficzek used in his works of artistic quality at the Pannonia Film Studio and the Animation Film Factory of Cologne, are equally important among his techniques and treated as equal in terms of experimentation. Acb’s latest exhibition of artworks from Ficzek’s coherent but tragically brief oeuvre presents a representative selection of moulded – or rather embossed – canvases, which can be regarded as unique products of post-war Hungarian art, with a focus on problems of plane and plasticity as well as the multiperspectival character of forms and the lyricism inherent in the abstraction of objects.

The use of embossed, specially shaped canvasses runs throughout the entire oeuvre of Ficzek. Already during the time he was working on his earliest geometric pieces, inspired by the Geometric Abstraction of Ferenc Lantos, Ficzek's colourful, plastic-foil coated panels emerged, with their simple, austere forms, their outstanding but lyrically concealed visuality. As with other members of the Pécs Workshop, Ficzek's individual interpretations of abstraction in the late sixties and early seventies led to conceptual works and an experimental, mediumunspecific program. The central theme of Ficzek's practice in this decade is the relationship between the plane and three-dimensionality. The field of experimentation is the photograph, which has entered the repertoire of artistic means of expression: the objects depicted on it are transformed by the way they are illuminated, by the manipulation of light, by the various projections, their layers of meaning are made uncertain. Among the elements of reality, Ficzek's photographs focus on the human body through the visual variations of shadows, movements and silhouettes. Contradictions of perspective, distortions, misalignments of proportions and fragmentary highlights appear in Ficzek's images as self-evident visual elements, yet they are enigmatic and cryptic due to their complexity. The question of legibility is also an essential feature of the prints Ficzek made in the second half of the 1970s, often based on photographs (of legs, hands, figures and often surreal combinations of these body parts).

Here, too, the relationship between plane and space is particularly important and holds a visual potential that is enriched both conceptually and formally by Ficzek's moulded canvas medium, which was still strictly geometric in the early seventies, and then slowly became more figurative as did his subjects. As Ficzek wrote in 1978: 'When I use an ensemble of planes as an umbrella to hold up a projected image, the image is modified along the lines of the umbrella's fractures, thus exhibiting characteristics that differ from the spatiality of the projected object. If I take a photograph of the resulting projected image and its object together, the resulting image will already show a figure from several viewpoints. If the film is projected with the object inserted and photographed again, I gradually start to switch on newer and newer perspectives. In this way, transformed images of the things appear, prominent spatial situations are created, viewpoints are blurred, and the perspective image of the objects is modified. The viewer must also find the points of reference in the picture from which they can proceed through the layers of space in a different way than in images based on a single point of view. Elsewhere, a regular image is juxtaposed with strange or distorted images emerging from alternative perspectives. The viewpoint of interest here is the one from which the irregular appears regular. This is, in fact, the basis for the spatial problematics of the stretched sculptures. I intend to unite in the stretched sculptures the already roughly sketched interactions of space and plane.’*

At the beginning of Ficzek's career, new progressive performing arts initiatives such as the Bóbita Puppet Theatre and the Pécs Ballet were emerging in the vibrant artistic life of Pécs, where a new sensibility and a new scenographic language were taking shape and where the expressive power of movement, the hand-pantomime, was also gaining central importance. In the 1970s, the work of several members of the Pécs Workshop was characterised by avant-garde, free-spirited serial photographic pieces and performances, which attest to a simultaneously unfolding, unrestrained, process-based artistic thinking. Ficzek's creativity and restless imagination attest to merging with this performative, inspirational way of thinking, open to the interplay of different artistic disciplines. His sculptural canvases carry on the themes and modalities of photography, printmaking and his own early geometric works and open up chapters in the continuing development of a short creative career, such as the making of films, marked by the significant work – which can be found on the Internet as well – the 1981 animated short film titled Exits left behind. 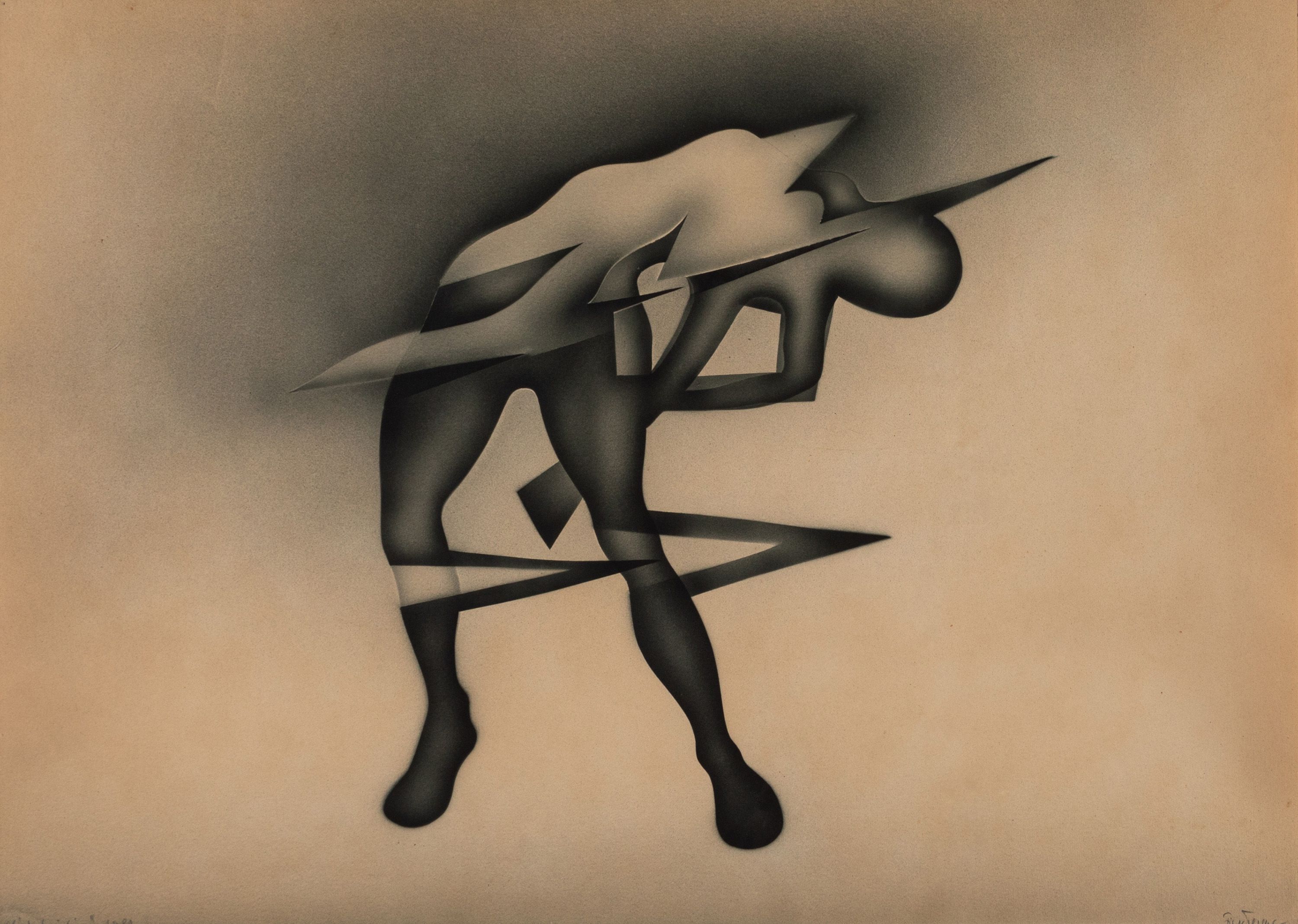