Following her participation at the 2022 Venice Biennale, Zsófia Keresztes (1985) presents her latest monumental sculptures in her first solo exhibition at acb Gallery. Simultaneously, her works that debuted at the Hungarian Pavilion in Venice are on display at the Ludwig Museum Budapest until 26 February.

Over the past decade, Zsófia Keresztes has shown, among others, at the biennials of Lyon, Timisoara, and Ljubljana as well as at the Baltic Triennial in Vilnius, and became the most internationally known and exhibited Hungarian artist of her generation. Keresztes graduated from the Hungarian University of Fine Arts in 2010 as a painter, although her attention was drawn to textile and paper objects early on.  The artist sensitively combines the themes of sensuality and virtuality in her creative practice, while she often works with digital and psychological references emerging from the aesthetics of trash. The stylistic features of her recent works seem to also be a combination of a fictional tribal culture that spans across the ages, Art Nouveau with its penchant for mosaics, and Surrealism.

Most of the works exhibited at acb Gallery have already been featured in a group show of CAN, Neuchatel at the end of last year. These new sculptures are far more figurative than any of the artist’s earlier pieces: Keresztes’ figures that had been androgynous and formless, now bear strong, identifiable feminine features. Furthermore, the interconnected group of new works, including 3 sensual drawings, tends to move towards narrativity. The worm, a reoccurring motif in different media in the artist’s work, is now presented in form of small statues, which are layered with mosaic (Soft Alliance I.-VI.). The sculpture entitled Fence blocks off most of the gallery space by its far-reaching form and seems to be protecting and shutting off the space and ’habitat’ of the worms from the viewers of the exhibition. The totem-like statue, that faces viewers, forms a strong barrier and appears as an ancient idol, a magnified Venus of Willendorf. The emphasized apple heads of the sculptures open up the works’ interpretation towards Biblical overtones, as the forbidden fruit from the Garden of Eden occupies the symbolic position of the logos on the human body. The apple heads are also clearly connected to the sculptural and pictorial representation of the worms as if their coupled heart shapes counterpoint the apple heads by evoking emotions. However, perhaps a clearer and more spectacular element of the exhibition is that the new additions to the sculptures are the red levelers that emphasize the desire for balance in the exhibited sculptures.

This solo exhibition marks the beginning of a collaboration between the artist and acb Gallery, as from 2023, Zsófia Keresztes joins the ranks of artists represented by the gallery. 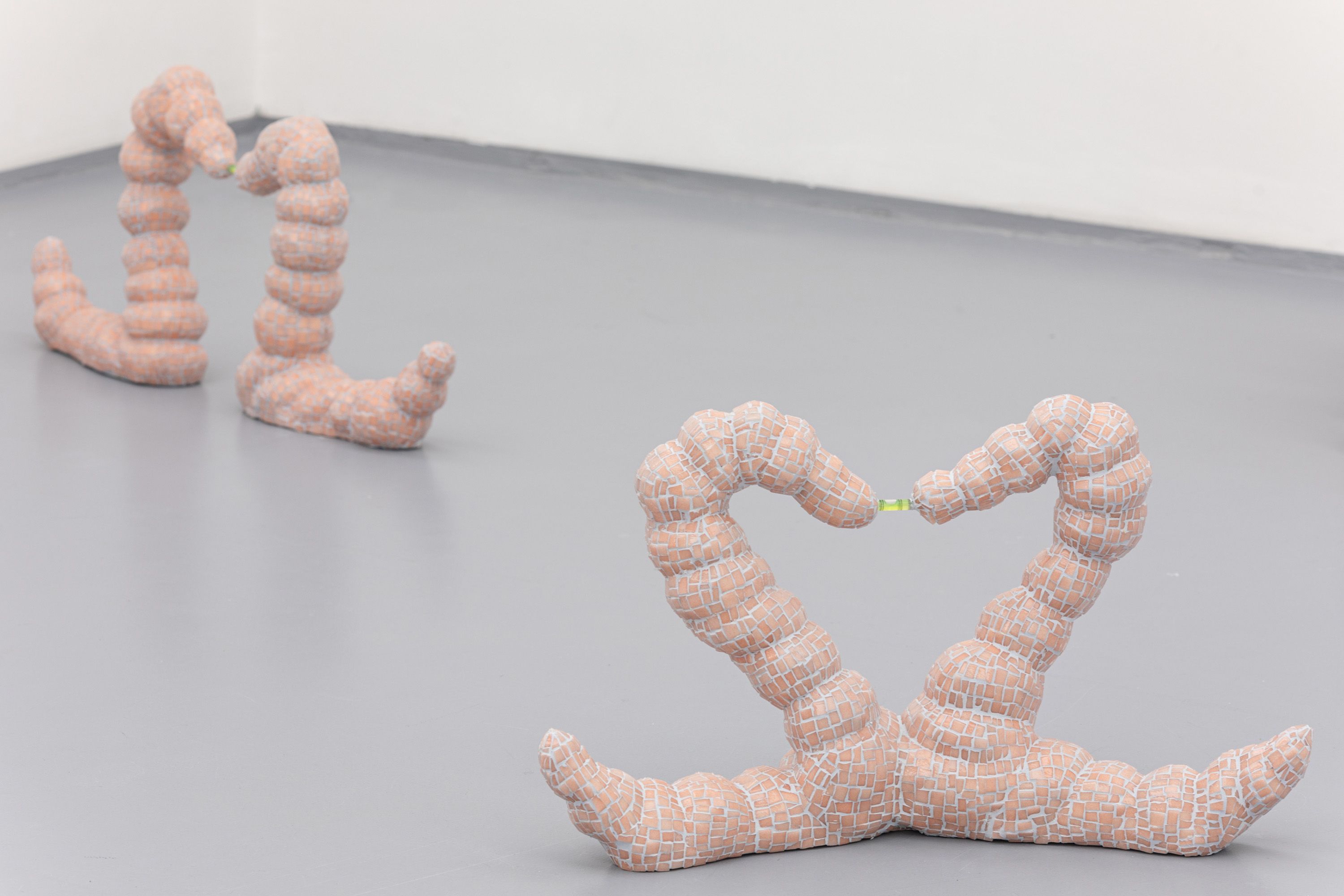